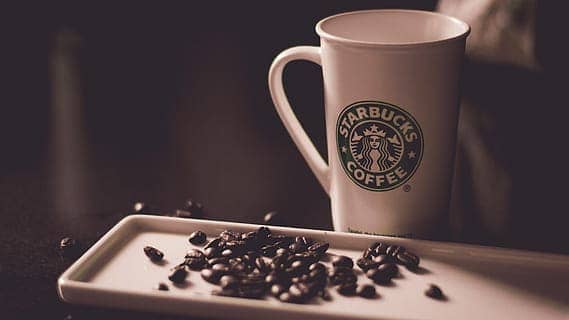 Starbucks is known for its great-tasting drinks. But what coffee does Starbucks use? According to their official website Starbucks only uses 100% arabica beans. These beans are sourced from over thirty countries based in the three central regions of Africa, Latin America, and the Asia Pacific.

All of Starbucks coffee is 100% Arabica, the most popular type of coffee bean in the world. It is also known as Arabian coffee. This coffee was first cultivated in Yemen. Resistant to many coffee diseases, this type of coffee bean possesses delicious flavors and enticing aromas. Arabica trees need high altitudes and tropical weather conditions to thrive. They mainly grow in Africa, Latin America, and Asia-Pacific. Historically

the first records of the arabica coffee come from Arab scholars who described that this drink increased their working hours.

Not just Starbucks use great coffee to start with, they also source it ethically. Ethically sourced products ensure that they have been obtained responsibly and ethically. As our awareness as consumers has grown, it’s natural that we wonder where Starbucks, the largest coffeehouse chain in the world, gets its coffee from. Starbucks promises its customers that its sourcing practices are based on the welfare of society. The coffee has also been verified by C.A.F.E measurements to be ethically sourced.

You Can Find Specific Information About Most of Their Coffee Beans on the Company’s Website.

Starbucks started its community website in 2008. they intended to collect suggestions and feedback from the customers. Now their website contains most of the required information regarding the company and the coffee.

Starbucks Has Been Roasting Its Beans for Years Since Howard Schultz Took Over the Company in 1987.

Starbucks Roasts Its Beans During Manufacturing to Maintain Consistency.

The coffee bean grows like cherries. It takes about five years before a coffee tree produces a harvestable crop. The number of coffee beans obtained from one tree after processing mounts to just a pound. The green coffee beans are roasted in a large rotatory drum. As they are being roasted, they first turn yellow, then light brown, and then after 11 to 15 minutes of roasting, they turn to their desirable dark brown color. They have the most amount of flavor packed in them at this stage. Controlling the roasting process on their owned plants ensures consistency in taste so that every time you buy your favorite cup of coffee, you are not disappointed.

The company uses its own roast for making its famous espresso. This dry roast espresso blend is available for purchase online. Many of the company’s signature drinks use the espresso roast as their base. This includes drinks such as lattes, mochas, cappuccinos, and more. They have been using the signature espresso blend for over 30 years and do not intend to change it.

If you enjoy the cold brews of coffee over the hot ones because of the acidic content of the latter, Starbucks has it covered. The coffee beans used in the colder blends are still the famous arabica beans. Preparing a cold coffee brew is mainly about the process.

The cold brew coffee grounds are steeped in cold water for 12 hours. Since hot water does not hit the grounds, its acidity remains low. Thus the delicious cold-brewed coffee has lower acidity.

This is not to be confused with cold coffee, which starts off being made in the same way as the espresso. The coffee blend is first brewed in hot water and then cooled down over ice in the cold coffee. Then other ingredients are added to complete the preparation.

Starbucks uses its own propriety blend for decaf. As you might have guessed, the coffee beans are 100% arabica beans. The decaffeinated version of the beans does not lose any flavor and, according to their website, holds the same notes as the fully caffeinated ones.

For some people, gluten-free is the only choice available. Starbucks has a lot of variations available for people who might have gluten sensitivity or intolerance. When choosing a coffee at Starbucks for a gluten-free option, just steer clear of the oat milk coffee. Oats are usually processed in large.

Furthermore, the coffee beans that the company sources are not fair trade since they are bought from a second party seller and not directly from the farmers.

Starbucks is a responsible company with good coffee bean sourcing and roasting practices.

When you walk into a Starbucks coffee shop and order yourself a cup of coffee, do you ever stop for a moment to really think about what you’re doing? Maybe it doesn’t matter as long as the coffee tastes good, but you’ll be surprised by how much is going on every time you enjoy your favorite coffee.

From bean to barista, the Starbucks coffee experience is a marvel that should be celebrated every step along the way. The knowledge, passion, and dedication of their people, combined with their sophisticated processes, are what makes Starbucks stand out from the crowd.

Can You Drink Coffee Creamer by Itself? Here’s...

Can You Put Heavy Whipping Cream in Coffee?...