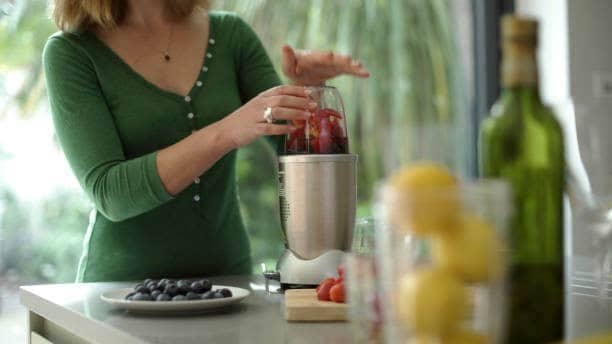 A nutribullet is a multi-purpose blender. It is meant to blend all types of food into pastes and liquids. However, people still question its ability to grind certain items.

The nutribullet, depending on the machine, has two different types of blades. The extractor and the milling blade.

The extractor blade has four prongs used to cut fruits or vegetables into drinks and smoothies.

The milling blade has two prongs and is used to convert the items into a powdered form.

In this article, we will be looking at how you can use a nutribullet to grind coffee beans. But before we dive into that, let’s look at what makes a Nutibullet different from its competitors.

The nutribullet offers a unique bullet-shaped cup instead of a traditional jug on top. In addition, the cup is conveniently sized to fill one portion aiming to create convenience for smoothie drinkers.

Nutribullet also helps extract more nutrients out of your ingredients with the help of thinner blades and a powerful 600-watt motor that rotates at 20,000 RPM. Thus making sure your ingredients are blended as fine as possible.

The nutribullet is also highly convenient to use. Its controls are fundamental, and you do not have to go through the fuss of choosing speed options as its basic models offer pulse controls instead of traditional multi-speed options.

Can You Grind Coffee Beans In a Nutribullet?

You can use a nutribullet to grind coffee if you do it correctly. You can use the blender to grind it in different measures of fineness as well.

However, before that, you need to change your nutribullet.

A nutribullet allows you to grind your coffee in various forms. We have listed the three best methods below:

A coarse grind has a chunky texture and resembles kosher salt. This type of grind can easily be achieved by using a nutribullet.

Fill the cup up to 2/3rds of its space. After you’ve done that, give it two to three pulses, and you should be golden.

A coarse grind is usually used by coffee makers who use a french press.

You will generally find medium grind as the standard consistency of store-bought pre-ground coffee.

For a medium grind, fill the cup 3 quarters with coffee beans. Afterward, give it 5 to 6 pulses with a one-second duration each.

A medium grind is recommended for those who use siphon brewers and flat bottom drip coffee makers.

Fine grind is another famous store-bought consistency for coffee. It is usually used for making espressos.

For a fine grind, fill the cup with coffee beans and run the nutribullet for two minutes. Make sure to give 10-second intervals as well. During those intervals, shake the cup while keeping the lid on. Shaking will help ensure that the larger chunks go to the bottom, allowing for a finer grind.

An extra-fine grind is also commonly referred to as a Turkish grind. A Turkish grind has flour consistency and is used to make Turkish coffee.

Which Nutribullet Model Should You Choose?

Now that you know a Nutribullet can grind the coffee, the next step is choosing which model will do the best job for you.

While the basic model is good for normal blending, it is not recommended for grinding coffee. This is because it doesn’t come with a milling blade, and even if you buy one, you run the risk of burning the motor.

Your choice may vary on several factors such as price and performance, and we’ll take them all into an account. Here are some of the best nutribullet models out there:

The Nutribullet pro comes with a better 900-watt motor. Although grinding does not necessarily require that much power, it will ensure that your machine doesn’t burn out.

This variant does not come with a milling blade either, and you will have to purchase it separately

Although this model is similar in features to others, it has a very sturdy 1200 watt motor. Identical to the Nutribullet Pro 900, it also has a 32 ounces cup which is slightly bigger than the basic model.

However, you will also have to buy a milling blade with this variant.

This is one of the original models of the Nutribullet. It includes a 24-ounce cup and a 600-watt motor.

This model only contains the extractor blade, which is not helpful to grind coffee. To grind coffee in the Nutribullet 600, you’ll have to purchase a milling blade separately.

You can grind coffee beans in a nutribullet as it can be used for various purposes. All you have to do is to ensure that the blades are correct to grind the coffee beans or not.

The nutribullet usually contains extractor blades that cannot be used to grind coffee beans, so you will have to replace them with milling blades.

Will Starbucks Grind My Coffee Beans? Here’s The Answer!